A sarcastic isekai comedy about surviving in a fantasy world with only the weirdest magic powers. Inspired the hit manga!

When sarcastic loner Haruka gets transported with his class to another world, he’s not wild about adventuring, but he wouldn’t mind having some cool powers. Unfortunately, he’s last in line when the magic cheat skills get divvied up, so by the time it’s Haruka’s turn, there are no good choices left. Now Haruka will have to take on this fantasy world the hard way–on his own, with a hodgepodge of bizarre skills! When infighting and chaos break out among his classmates, can this loner come to the rescue? 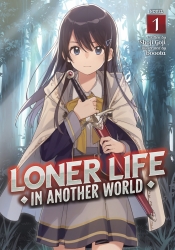 Reviews of Loner Life in Another World

If you liked Loner Life in Another World, you might also want to try…

One thought on “Loner Life in Another World”

The World's Finest Assassin Gets Reincarnated in Another World as an Aristocrat Volume 3 (paperback/eBook)
Amazon — Book Depository — Rightstuf - Indigo
ISBN-13: 9781975333355

Banished from the Hero's Party, I Decided to Live a Quiet Life in the Countryside Volume 4 (paperback/eBook)
Amazon — Book Depository — Rightstuf - Indigo
ISBN-13: 9781975312510

My Next Life as a Villainess: All Routes Lead to Doom! Volume 10 (eBook)
Amazon — Apple Books — Kobo — Google Play -- Bookwalker

Mapping: The Trash-Tier Skill That Got Me Into a Top-Tier Party Volume 7 (eBook)
Amazon — Apple Books — Kobo — Google Play -- Bookwalker