Synopsis: In the East is a land ruled by an emperor, whose consorts and serving women live in a sprawling complex known as the hougong, the rear palace. Maomao, an unassuming girl raised in an unassuming town by her apothecary father, never imagined the rear palace would have anything to do with her—until she was kidnapped and sold into service there. Though she looks ordinary, Maomao has a quick wit, a sharp mind, and an extensive knowledge of medicine. That’s her secret, until she encounters a resident of the palace at least as perceptive as she is: the head eunuch, Jinshi. He sees through Maomao’s façade and makes her a lady-in-waiting to none other than the Emperor’s favorite consort… so she can taste the lady’s food for poison! At her lady’s side, Maomao starts to learn about everything that goes on in the rear palace—not all of it seemly. Can she ever lead a quiet life, or will her powers of deduction and insatiable curiosity bring her ever more adventures, and ever more dangers? 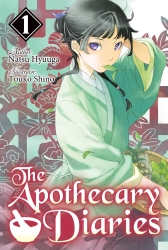 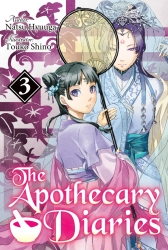 Reviews of The Apothecary Diaries

If you liked The Apothecary Diaries, you might also want to try…

One thought on “The Apothecary Diaries”