Transported to a fantasy world for a roguish new take on the isekai genre. (And don’t miss the manga adaptation, also from Seven Seas!)

Oda Akira is the kind of guy who people forget is even there. His unassuming nature pays off, though, when his entire class is swept away to a fantasy world, and he slips easily into his new role as a silent assassin. Between his suspiciously high starting stats and too many details that don’t fit, Akira is sure something is wrong. But digging into royal secrets is a dangerous game, and when Akira uncovers an evil scheme, he also makes a powerful enemy—the very king who brought him to this world! With the help of the elven spirit medium Amelia, can he find the power to set things right, and get his revenge? 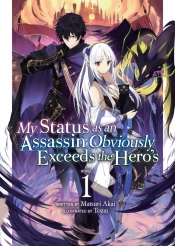 If you liked My Status as an Assassin Obviously Exceeds the Hero’s, you might also want to try…