Yoshio is thirty years old, and his life is a mess. A shut-in living with his parents, he has no job, no relationship, and no prospects. When he receives a new sim computer game that boasts characters created with a new kind of A.I., he doesn’t think much of it–until he gets drawn into a fantasy world so vibrant and lifelike that its residents can’t just be game characters. Suddenly finding himself the benevolent god of a scrappy fantasy village is a lot for Yoshio to handle, but it might be the key to the change he is desperate for. 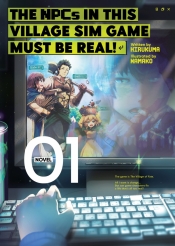 Reviews of The NPCs in this Village Sim Game Must Be Real!

If you liked The NPCs in this Village Sim Game Must Be Real!, you might also want to try…