From Beast to Beauty

Sakamori Kagami was one of the top players in the VRMMO Ark Earth Online as Danblf, a veteran summoner with the gravitas to match his elite status. When he falls asleep playing one day, he’s transported to a world where the game is reality–but instead of his all-powerful avatar, he’s stuck in the body of a cute young girl! He can’t let anyone know that this little cutie is really Danblf, so he takes the name “Mira” and claims to be Danblf’s disciple. If this gets out, he’ll never live it down! 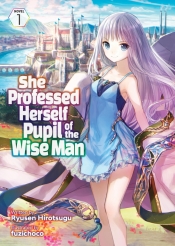 Reviews of She Professed Herself Pupil of the Wiseman

If you liked She Professed Herself Pupil of the Wiseman, you might also want to try…