DEATH COMFORTS US ALL

​When a black-robed skeleton shows up at Mira’s door in the dead of night, the last thing she expects is for him to cure her fatal infection! Her nighttime visitor is Undead King Terios, who soon finds himself feeding and teaching the peasant children he saved from disease during a chance encounter. With guidance from this terrifying yet kindhearted skeleton, Mira blossoms into an apprentice magic user. But will her idyllic world shatter when the nobility sends a squad of knights to eradicate the “skeletal menace”? This is the legend of an Undead King who aims to conquer the world without taking a single human life! 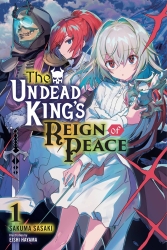 Reviews of The Undead King’s Reign of Peace

If you liked The Undead King’s Reign of Peace, you might also want to try…